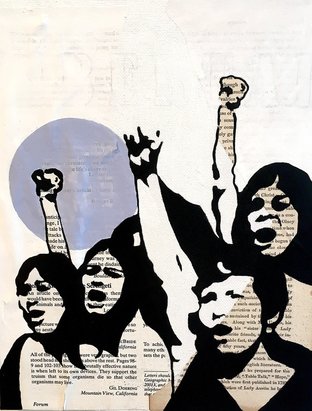 The body of work compiled over the past few years intends on translating diverse oral histories of hopes, dreams and justice movements into multi-modal images that can agitate and inspire. Working closely with issues that raise awareness on social change and gender violence, I have more recently began to explore the conditions of women, immigrants and refugee claimants from the marginal sidelines, serving as a direct observation and comment on social realities with which I remains closely informed.
Since 2010 my work has primarily and purposely worked with black and white monochromatic imagery in order to create impactful yet sensitive compositions that hold an intentional sense of urgency following the idea of polarity between darkness and light in achieving a more forceful interpretation of the subject matter (Itten, 2003). More recently, I have experimented with using bold and vibrant spurts of colours and high contrast images through a series of small-scaled prints, in order to find new approaches towards moving those viewed as marginal to the center. These works feature stories of missing girls and women, migration, struggle, inclusion and resistance. They were created with the purpose of serving as an alternative platform from which to reach and project marginalized voices and stories. This new use of colour and printing technique experimentation reflects my local and global community as well as their resistance and struggle to create a new and more conscious world. 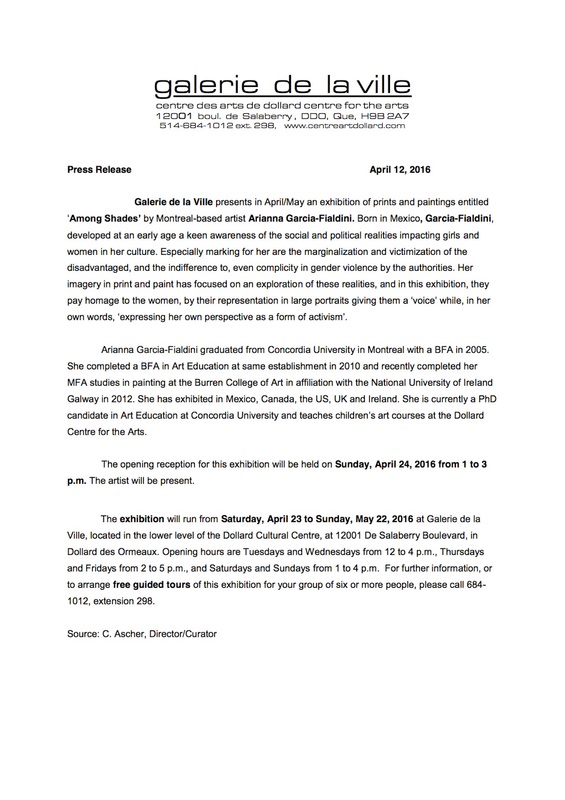 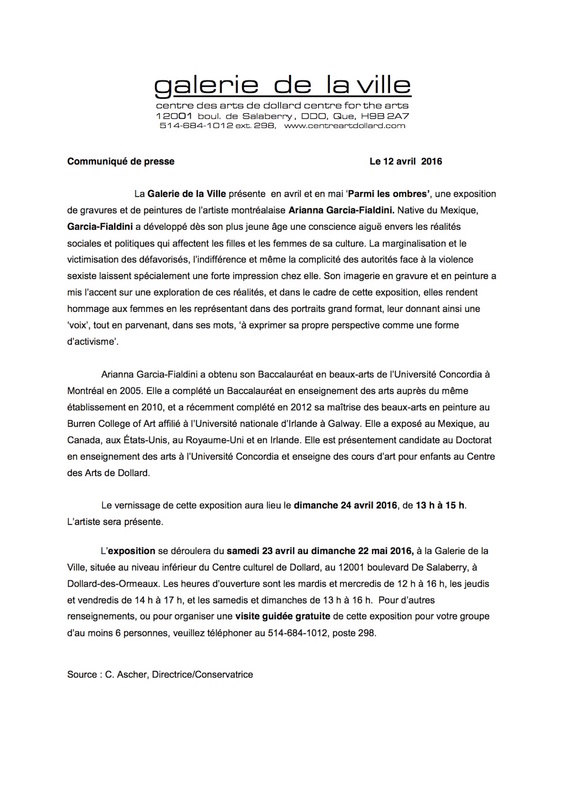 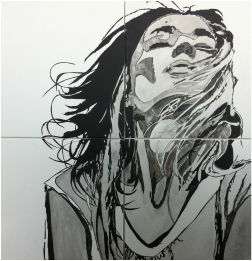 Since this January I have focused my practice and thematic on the ongoing reality of raising a social conscience towards advocating equal rights for women in current society.

Sprinkled with a touch of new wave feminism and tasteful yet playful provocative controversy in the image choices, this year's annual solo exhibition relates with this shady ongoing universal concern and with the non-visible reality and nature that many women are subjected to and live with, because of their gender, on a day to day basis around the world.

Women's consistent objectification, imposed or implied hyper-sexualisation, constant self-image awareness and consciousness in a still largely patriarchal society have been all important thoughts in this compilation. These concerns and considerations were applied consciously to the building and development of the images chosen, and the artistic expression executed in the body of work being displayed.

In Between Shades sums up some of the very real grey zones in which women's portrayal of themselves and to others remains in, and how their roles in society are still somewhat blurred in both the private and public spheres. 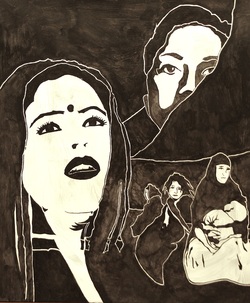 Throughout the universal history of art, women have been depicted as either Madonna or whore; as nurturing care-givers or as malicious, hyper sexualized sinful temptresses. Very few depictions seem to fall into the ambiguous limbo of the “in-between”.   It is this extreme bipolarity of the two options or opposing sides of the female interpretation and representation spectrum that we reference when questioning their roles. It is precisely this that I find seductive and intriguing. This very ambiguous middle ground that I have been exploring while preparing and building this compilation of art works for April 2013.

From Picasso”s “Les Demoisselles d’Avignon” in 1907, to Tamara de Lempicka’s “Nude with Buildings” from 1930, and finally to Cindy Sherman’s “Self-Portrait of Marilyn Monroe” in 1982; classical to contemporary female and male artists seem to continuously and consistently favor women as their muses, subject matter and study concentrations. And I am no exception.

Having recently completed my graduate studies in Fine Art and Activism a year to this day; looking back in nostalgic retrospect I can say that the same on subject matter can be said for me. The issues being questioned may alter or branch off lightly, but the subject remains the same.

Women and their roles in politics, religion and the public and private sphere, as well as how they are viewed and perceived by society, the collective unconscious, men and other women, are ongoing concerns of mine that inevitably continue to feed my work in different mediums, not only through images but similarly in the shape of other questions.

The compilation of work gathered for this exhibition aims and continues to do exactly that; I ask out loud, where is the line drawn between being viewed or perceived as either victim or vixen as a woman? How does the context in which she is seen, body language, attitude, energy and consensus or majority play an active role in how a woman is perceived and how she herself perceives not only herself but other women?

What ties all images in this body of work together through paint, print and ink, are the characters’ strengths and weaknesses. Most importantly, that they were all created with the idea of a “not-so-conventional” Heroine in mind and that they are all survivors, warriors and Women. These ladies and the visual conversations I have shared with them over the past year, keep me busy asking questions every day and looking for answers. 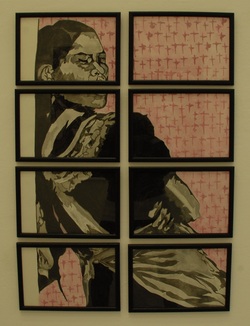 Ciudad Juarez is known as “the path to the north”. It is a city in the Mexican state of Chihuahua. It has an estimated population of 1.5 million people. The city faces El Paso, Texas with a river that divides both of these regions as a boarder. Ciudad Juarez is a major point of entry and transportation for all central Northern Mexico. The city has a growing industrial centre which is made up in large part by more than 300 assembly plants called “maquiladoras” located in and around the city. It is a city of widespread poverty and violence, including an infamous series of unresolved murders of female factory workers. The violence generated by the drug war translated into more than 2,600 killings in 2008. UN Intervention has been called within the last 2-3 years.
The phenomenon of the female homicides in Juarez is called “femicidio”, involving the violent deaths of hundreds of women since 1993. The estimated homicide toll is speculated by a uthorities to be about 400, but many local residents believe that the true count stands at an estimated 5,000 victims. Most of the cases remain unsolved to this day.

According to Organization of American States Inter American commission of Human rights- the victims have predominantly been young women between 12-22 years of age, many of whom are students and most of whom are maquiladora workers. A large number were relative newcomers who migrated from other areas of Mexico.
The victims were generally reported missing by their families, with their bodies found days or months later, abandoned in vacant lots, outlying areas or in the desert. In most of the cases there are signs of sexual violence, torment, torture and in some cases disfigurement. Juarez is also known as the “forgotten city” by its inhabitants, its neighbors, the space between them and the dread and silence that falls on its women. What actually happens to these young girls and women varies but holds many similarities between each case, and the reasons as to why these women go missing in the first place is still left to many interpretations, yet one thing is certain…. The missing girls of Juarez must stop.

According to Amnesty International as of February 2005, more than 370 have been murdered in the cities of Juarez and Chihuahua. In November 2005 BBC news reported Mexico’s human rights representative saying that 28 women had been murdered so far in 2005. Despite past and current unsolved murders in August 2006 the federal government dropped its investigation, concluding that no federal laws had been violated. A group of mothers, families and friends of victims called “civil association for the return home our daughters” was formed to raise awareness about the situation and put pressure on our government to pay attention to these cases, some which have gone unresolved for 13 years. Another family organization called “voices without echo” was founded in 1998 and they began painting pink crosses on blank telephone poles to draw attention to the problem and align themselves with family values. This has become an iconic symbol that unfortunately continues to fill the fields of Juarez day by day, more and more.

My biggest artistic goal is to tell some of their stories through my work. I feels as if I owe these women something, for being fortunate enough to have a voice, to speak both languages, to be Mexican, to be alive, to be a woman, and to be able to contribute at least in some small way to helping this madness stop. I propose to use my art to express MY feelings about the subject as well as to raise awareness on the situation.